Stress and mental health at the place of work have received great attention by researchers. In spite of technology improvement in high-tech systems, the operators face new problems, which can affect mental health. There is hardly any published research about stress or mental health in such workplaces in developing countries. This paper presents the application of the self-rating scale General Health Questionnaire (GHQ-28) to study mental health of 160 controllers working in a part of Air Traffic Control (ATC) as a high-tech system in Iran. Logistic regression analysis showed that demographic variables did not exhibit a statistically significant effect on scores of the test. In order to compare mental health of these operators with general population, an exposure / non-exposure study was designed. Three age groups (less than 29 years, 30 through 39 y, and more than 40 y) were compared in exposed and non-exposed groups. The results of Fisher’s exact test showed that mental distress symptoms were significantly higher in the exposed group. There were significant job effects on somatization, anxiety and depression as well as on the total score of GHQ-28 for the two first age groups (P<.05). No significant effects of the job were found on social dysfunction symptoms in any age groups. The risk ratio of expressing depression and anxiety symptoms were more than three times greater in these operators than general population.
How to Cite
1.
Sh Arghami, J Nasl Seraji, K Mohammad, Gh Zamani, A Farhangi, W Van Vuuren. Mental Health in High-Tech System. Iran J Public Health. 1;34(1):31-37.
Download Citation 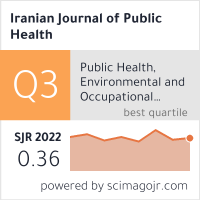